Over the weekend was this years Detroit Maker Faire.

We built, Make and Partied the weekend away!

On friday creators spent the day at i3 putting the finishing touches on their creations, while others prepared for the party saturday night. The space was spotless as a dedicated group stayed over night and constructed a photo booth which became a huge success at the party.

i3Detroit’s PowerWheels teams took 1st(#3) and 3rd(#13-Sean’s car) in the endurance race Sunday. Saturday, i3 took 1st in the 15 lap road course. There is a “YES”(1st place) medal that has been added to the trophy cabinet. For the Power Racing Series, Detroit was weekend 2 of 3, so we head to Chicago next weekend and hopefully all kick some butt to bring home so real trophies!

The party may not have won any awards this year, but we still had fun!! El Guapo taco truck came out, as did Treat Dreams, and Meed by B nektar to help party the night away.  Sunday at least 5 projects from i3 walked away with editor choice ribbons. 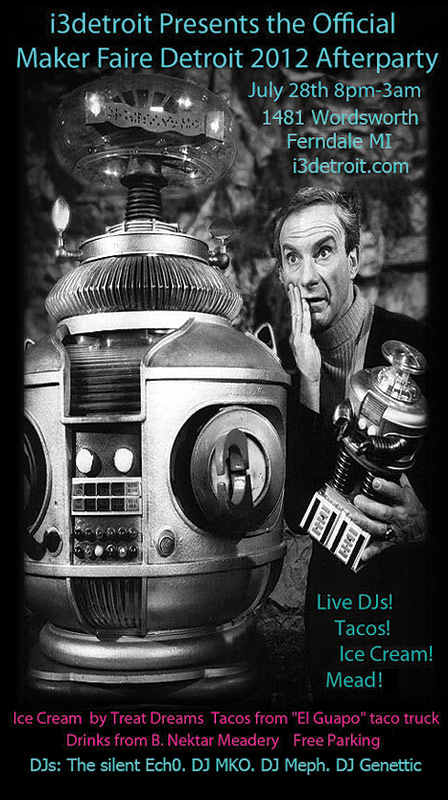 Maker Faire starts today!!
Stop by the i3 tents and check out our projects!
Also don’t forget about the official after party hosted tonight at i3 from 8PM til 3am

Voting continues, Vote for the Tri3 at http://creation.redbullusa.com/#/?page=i3Detroit Remember to turn off your popup blockers for the vote button. Also, we will be working on cleaning up the space and working on some more build-out for our Maker Faire After Party on 7/31 after the faire.  Please come and help out with your building, painting or cleaning skills.  No skills necessary – we can train you on any of the desired tasks.

Hope to see everyone there.  Contact us with any questions.  contact@i3detroit.com

We received an email last night from Dale at Make Magazine providing us with some updates regarding the upcoming Detroit Maker Faire.

3. They currently have 140 submissions and they are still looking for more. If you know anyone that has not but should be at Maker Faire Detroit please get them to submit an application!

4. On the Friday before Maker Faire Detroit they plan on having workshops in place of Education Day. More to come on this as we get closer.

So Please if you have not signed up yet as a Maker get over MakerFaire.com!