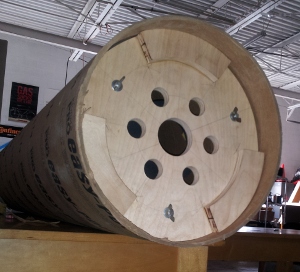 14-inch dobsonian telescope tube (concrete pouring tube) plus the tailgate, the rear of the mirror cell, installed to check size. I have since painted the tailgate black (as you can see in the below image) and added locking ("push") screws. 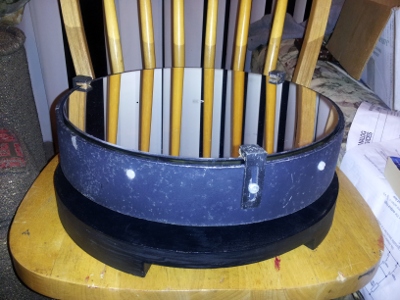 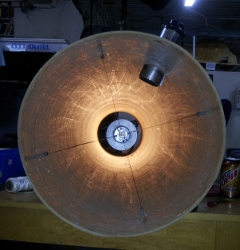 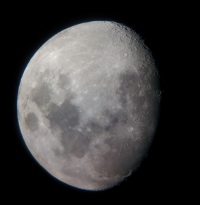 August 27, 2012: power out at i3. What to do? Lets try shimming the primary mirror into place to see if this thing works at all. It sure does, and here's the picture taken with a cell phone through a cheap huygens eyepiece to prove it. This in turn proves that the tube is long enough (by at least, it turns out, a foot). 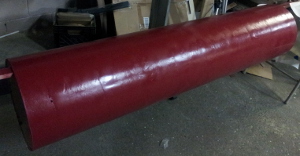 Painting the tube was a lesson in never assuming one has enough masking. Somehow the entire inside of the tube has a light misting of red paint now. 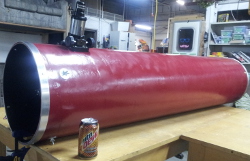 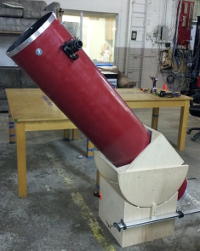 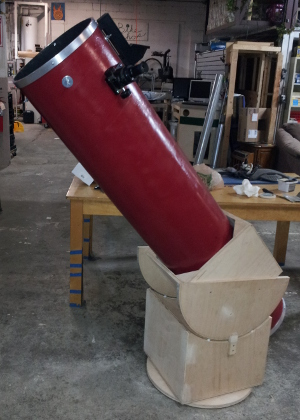 Azimuth bearing complete but a little wobbly. Need to sand down one or two of the teflon pads. Then it's just clearcoat and I'm done! 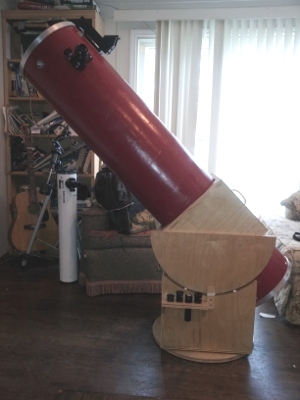 Complete! In the background is my 4-inch reflector which is probably feeling a little inadequate. Now, where the hell am I going to store it?! 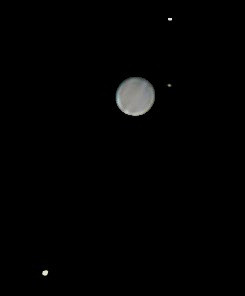 Guys, look at how awesome this is. Thanks, Steve.

A friend of mine gave up on finding time to start his project to turn the pile of telescope parts he got off ebay into a telescope. The project has become mine. The parts I inherited were a 12.5-inch f/5 mirror, a metal cell for it to live in with a 15.5-inch outer diameter, a rack-and-pinion focuser with a bent pinion, a secondary mirror, and a spider vane assembly. Supposedly, he was supposed to receive a tube, but it never arrived.

The dobsonian is currently living near the middle of i3's west wall.

2012-10-08: Well, last night I saw The Ring Nebula from my own backyard (I figured it was too light polluted), took a bunch of imagery of Jupiter, and discovered my primary mirror has a fairly serious astigmatism. Now, astigmatism can be caused one of two ways - one is the forces on the primary mirror from the cell it's in, and can be fixed by removing the forces. This is often referred to as "pinched optics". The other source of astigmatism is a manufacturing defect annealed into the mirror. I believe this issue is the former, as I don't think this problem was there the first few times I had it out (although, perhaps I wasn't looking). Full report pending.

2012-10-10: I pulled the primary out and found it was a bit pinched in its cell, so I've backed off everything then verified the mirror cannot fall out of the cell, but can move slightly. I had it outside for several hours last night, then tried focusing a bright star again. I was unable, as before, to resolve much more than an amorphous fuzzy mass. Now, to me, the telescope looks perfectly collimated in a cheshire eyepiece, however, today I found a website which (in the right top corner) contains an image that looks exactly like what I'm seeing, which seems to indicate my collimation is off (though they have an SCT. I imagine the same thing applies to newts). I'll be trying to collimate with a star, a CCD, and a video monitor next clear night. I think what I might be learning here is that the primary is not correctly center-dotted (and/or the geometric center is not the optical center?)

2012-10-17: Verified secondary holder centered in tube by removing secondary and sighting primary center dot through hole in secondary holder into which secondary mounts. I'm pretty positive I have perfect collimation and the issue remains. The current suspect is the secondary mirror. The secondary lives inside what could best be described as a soda can with a 45 degree cut through it, which has a lip on its 45 degree cut, to the inside of which is glued the secondary. It's the gluing of the secondary (with JB Weld, if I'm not mistaken, onto the reflecting (first) surface, again if I'm not mistaken) that makes me think the mirror is being bent out of flatness. I'm not sure how much success I'll have pulling the secondary out of JB-Weld, and a new secondary is about $150. The next clear night test will be to hook up the CCD and video monitor and try spinning the primary mirror cell in the tube with a star just out of focus (where it looks like a line at high magnification) to see if the orientation of the line follows the orientation of the primary. If it doesn't, I'm tearing apart and rebuilding the secondary holder (and if I break the secondary I can then confidently buy a new one), and if it does, I guess I just have a little cry about devoting three months of my life to building a telescope around an astigmatic primary (as there's no way I'll find a replacement that has exactly the same focal length, the optics market just doesn't work that way, and I might as well start over at that point).

2012-10-22: Fiddled with Newt-Web for a bit to figure out what size the secondary for this thing should be, then ordered a new secondary mirror. May have proceeded slightly hastily here and may have undersized the mirror. Whatever, it was $40, and if it shows up unbent, it'll still look better.

2012-11-10: Today I discovered that the warping of the field of view that I'd been seeing in the telescope may have coincided with the replacement of the secondary mirror, but the new secondary is not the cause - the eyepiece is! Apparently I was doing solar projection with the wrong sort of eyepiece and actually melted part of the lens. Replacement of this eyepiece with another I happen to have found from my younger days which is basically the same eyepiece results in non-warped fields of view again.

2012-11-11: Yesterday's discovery combined with today's completion of the replacement secondary holder have re-energized this project. Granted, completion involved adding three springs to something Steve basically made while I looked on and tried to learn a thing or two. It's gorgeous and you'll find a picture of it near the bottom of the page. Night of 11/11: tested with non-melted eyepiece and new too-small secondary (attached to Steve's new secondary holder), all signs of astigmatism gone! Stars at high magnification still look strange, but Jupiter is crisper than ever! Curiously, I'm now seeing diffraction spikes on bright stars, which is something I've never seen before. The new secondary holder also is way easier to collimate than the old one, so that too is awesome. Just need to get a properly sized (now that I know the formulas, it's about 2.6 inches minor axis) secondary. Can't wait to see Saturn in this thing, and that should be up in the mornings soon.

In trying to figure out why on earth my secondary is JB-welded to its holder around the entire edge, I've come across a few pictures that look like my spider assembly, and a few pictures that look like my original mirror cell. All of the telescopes I've found like this so far are made by Cave Optical Company, which appears to have a bit of a cult following. My mirror also has a sticker on the back proclaiming it to be aluminized by Pancro Mirrors, Inc, which is purportedly the company Cave had aluminize all their mirrors. I'll photograph the outer edge of the primary next time I have it out of it's cell.

If the primary is from Cave, it's quite possibly due for a recoating, as Cave folded in the early 80s.

Keeping a list of these may be useful, as the way magnitude is calculated for deep sky objects is weird. You may be able to see a magnitude 9 nebula, but not a magnitude 3 galaxy, for example. These things are magnitude <10 and angular size <30 arcminutes

The following steps may or may not happen if I decide I like poncet platforms, which is definitely a possibility.

I bought a 14-inch ID cardboard concrete pouring tube for this. I was unable to find anything with a 15.5-inch ID, so I needed to rebuild the back of the mirror cell (see below).

The next steps of building this behemoth will all be centered around the tube - sanding the light wax coating off the inside of the concrete pouring tube and painting it matte black, drilling the focuser hole, installing the spider vane assembly and installing the primary mirror. After all that's done, I'll be tearing it all apart and painting the outside. And all of those steps contain fiddly substeps that involve figuring out placement of things. And possibly using a few shims.

I rebuilt the back of the mirror cell out of birch plywood, which I painted matte black. This was a most educational process in which I learned that pine plywood is terrible, beam compasses are awesome (the tailgate measurements were done solely with a compass), oil paint is for people who know what they're doing (I just grabbed the first thing that said matte black), wood glue is pretty sweet and easy to use (I attached three pieces on the back of the tailgate to make hitting the tailgate with the screws that will attach it to the tube easier), and that despite how imprecise hole saws look, noone can tell at this scale.

I fretted about drilling the focuser hole and spider mount holes in my pristine tube for quite a while. Turned out it was quite easy - first, I sanded the edge of the tube flat and checked it with a square and a flat piece of board. Then I drilled the eyepiece hole one radius' distance from the edge, with a urethane foam mold of the tube's inside behind the drill bit to prevent tearout. I then filed out a notch for the rack of the rack-and-pinion focuser to fit in. I laid the spider on the outside of the tube to figure out how far back from the focuser hole the spider mounting screws would go. Then I tied a piece of string around the tube, measured all around to ensure it was the same distance from the end everywhere, pulled it off, folded it into eighths, hit one side with a sharpie, and put it back on. Now I had sharpie marks every 90 degrees. I remeasured everywhere to ensure the string was again the same distance from the end everywhere, and drilled the holes. The springiness of my spider vanes eased installation. Successes that surprised me at this stage: I didn't ruin the thing by drilling anything in the wrong place, the secondary doesn't bounce all over the place, and the focuser draw tube fits perfectly in the hole I drilled.

Another thing I learned here is that collimation of the secondary mirror is likely much more easily done without the primary installed, and instead with a light at the end of the tube. (I made a quick collimation eyepiece out of the top of a soda bottle and some masking tape with a hole poked approximately in the middle)

A recent idea I had was to make four small notches in the cell end of the tube. I could then remove the primary and insert two pieces of string (which would cross in the center of the tube, right?) to align the secondary.