Treasury and Budget Report for Nov, 2016 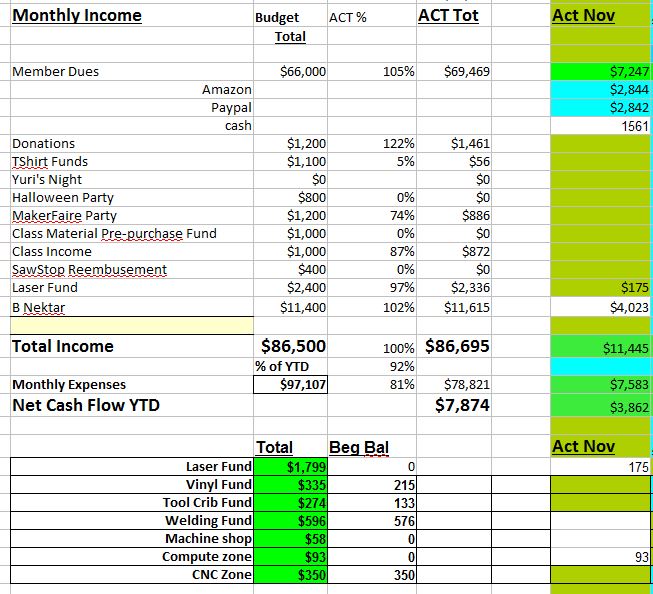 Action Item: Terry - Send out the 2017 Budget to the members' list.

Proposal:
Add $400 to 2017 budget to get a KnoxBox for the space
Moved by Jamie, Seconded by Evan
7 Ayes / 0 Nays
Result: PASS
Action Item: Evan - Find someone to buy/install knoxbox

Action Item: Matt G - Follow up with Mike W about becoming bike zone coordinator
Proposal:
Appoint Thad as co-coordinator with Jim for CNC Zone
Moved by Evan, Seconded by David
7 Ayes / 0 Nays
Result: PASS
Action Item: Jamie - Follow up with Dana and Karianne about them their specific plans for the treehouse

Action Item: Mike - Add the Equipment Reservation and Communication Overhaul discussions to the next member meeting.

Discussion Topics Relevant to Board or Member Discussion Lists

Charlie: This discussion wasn't settled at the last member meeting. Evan needs to apologize for what happened.

Evan: Agrees he will apologize because he feels bad about what happened. No because how how the system worked. This was all done with a clearly designed process.

Leora: We should take extra care when doing things that impact a person's possessions. We need to decide how to be inclusive in the diversity of members who do and don't use email.

Evan: The email announcing the cleanout was seen but not read/interpreted correctly. It was unexpected that, after doing the cleanouts for months, that anyone actively using their storage plots would not have seen it happening. It's hard to draw the line at how many notifications are sent and how much advance notice is needed.

Leora: we should try to balance our communication to

Charlie: back to the original topic: Evan needs to apologize.

Leora: A lot of art projects that are mostly irreplaceable.

Jan: We should make future changes/implementation for the storage policy taking what happened to her into strong consideration.

Vivian/Thad: We could set up a gofundme to help her out which would be a lot nicer than just a gift certificate or something.

Vivian: Vivian would like to call people when their storage is being cleaned out in the next implementation of the system.

Evan: There isn't a storage policy in place anymore, and he hasn't decided whether to pursue a new policy next year.

(Board members in italics)