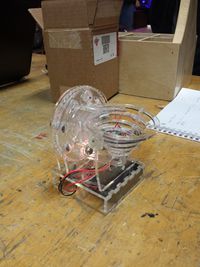 We ask for a vote.

Evan did some wiring over the weekend. Evan talks a lot about electrical things. Disconnects? Conduits? Drops. 40 years of terrible wiring, Evan has tar-covered skinless hands, is traumatized. Jamie zones out and things about whiteboard desktops. Evan should really just update the minutes before coming in so Jamie doesn't have to try to write all this down. Jerk.

New server is coming in a week!

Band saw is not usable, need to order a new one, but it is happening

Classes this month, scheduled and on the calendar!

Folks who did the WhenIsGood got invites. Some few seats still available. Walk-ins to full classes may not be able to participate, but are welcome to observe.

WhenIsGood link from earlier emails is still good, if anybody wants another class in January.

This Sunday is Hazel Park Ham Swap, 8 AM

Still shopping for a press