From i3Detroit
(Redirected from Powerwheels Racer)
Jump to: navigation, search 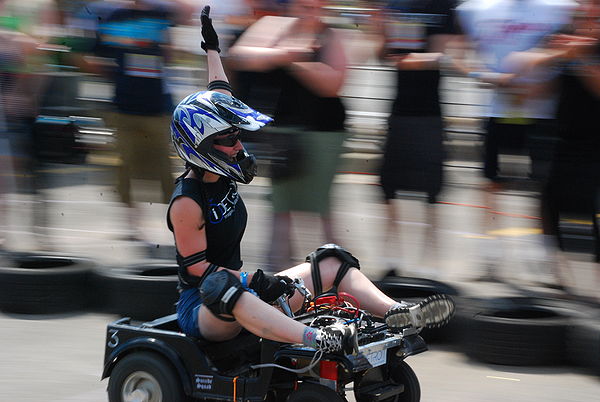 The venerable #3 car (also known as "Black Jeep") is the longest-competing vehicle in the Power Racing Series. It was designed for the first PPPRS competition at Maker Faire Detroit in 2011, and has competed there every year since. It was driven primarily by Karen "Cannonball" Corbeil, the mostest winningest driver the PPPRS has ever seen (3 seasons, 15 wins, 1 championship) until her retirement after the 2013 season. (See here for the tribute video from Jim). The #3 car continues into the 2014 season and beyond. 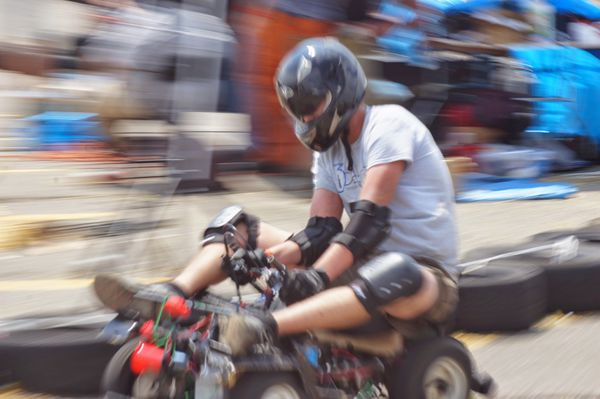 one of the motors and the chain is adjusted. The other one is proving difficult. Their are no more washer to remove, to adjust the chain, I tried shorting the chain. When I did that, the motor would rub on the break disk. The chain might just be to worn. It might be best to just get a new one. we also need a new master link the one that is on there is missing a piece. Are there any ideas to fix this problem or should we just buy a new chain. --UnixMonky (talk) 18:47, 21 May 2014 (PDT)

We need a Deadman's switch, so that the car is completely powered off and inoperable when no one is actively in control. I'm thinking that we should put some Anderson Powerpoles on the steering column right under the steering wheel (or on the steering wheel?), such that a matching set of wristband-mounted PowerPoles need to be connected to engage the controller (the controller has an on-off control separate from the power control). That way, when the driver's hand leaves the wheel, the car stops.

2.7.2 Kill Switch A Kill Switch system (a method to immediately cut power) must be incorporated in the vehicles. The kill switch MUST be easy to see and easily identifiable by track marshalls. We strongly suggest that teams have a huge, painfully obvious, big red button with massively bold letters clearly labeling the button as a Kill Switch. No power may flow through ANY electrical system on the vehicle when the Kill Switch is activated. NOTE: the Kill Switch must not be your “on” switch, nor can it be your throttle. Yes, you have to make a separate switch. No, it’s not too much to ask of you. Teams are permitted to seek any system necessary to achieve this, and it is up to the teams to implement it. A kill switch will not be part of the $500 budget and it would be really nice if teams that regulary exceed 10mph in a race spared no expense in developing and implementing one. PPPRS officials will request teams to prove that the system functions during the pre-race inspection.