The building can be hard to find. Send someone to stand outside and flag them down as they approach.

There's an AED for heart trouble. It's on the wall by the front door, below the literature holder.

For water washing up the driveway and into the front garage door (inconsiderate boaters not observing the no-wake rules on Lake Wordsworth!), deploy the flood barrier in front of the door. It's a plastic tube meant for holding down the edge of a pool cover, like this: 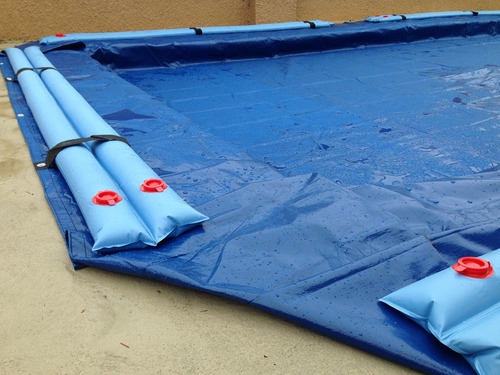 The tube is stored in the literature-holder by the front door. Flop it out along the front of the garage door, then use the garden hose to fill each tube. Some water will still get in, but this should stop the giant waves when someone cruises past.

There are simple sumps set into the two lowest places in the floor: One in the northwest corner by the dust collector, and one on the east wall behind the Haas. There should be a sump pump in each one. If the automatic controller doesn't start the pump (why else would you be reading this?), try plugging the pump straight in and bypassing the controller. Babysit it so the pump doesn't run dry for very long; that's not good for it.

Try kicking or thwacking the float sensor to get the automatic controller working.

The Genie is equipped with an inverter which can supply more than enough power to spin the sump pumps. Optionally, drive the Genie near to the load to minimize the amount of extension cord you need. The northwest corner gets wetter, so run that one from a shorter cord if possible, and drag a long cord over to the east pump.

Start the inverter by poking your pinky finger or a pen or something into the "ON" hole (larger of the two) and hold until the unit starts to beep, release during the beep and it should start up. Further details are on the Genie page itself.

There might be diagnostic meters on the door battery. While charging/floating (AC input working), the battery should read between 13 and 14 volts. While discharging (AC failed), the battery will read between 12 and 13 volts. At the end of the battery's charge, it'll dip below 12, and below 11 the door won't hold anymore.

The simplest and safest method is probably to just drag a longass extension cord from the Genie's inverter over to the door battery charger. Get the voltage to read above 13 again and you're good!

TODO: Make an adapter that'll make it easy/safe to plug a Power Racing battery into the door setup.