OpenHab2 is a centralized method to manage multiple IoT devices from a Web GUI.

There are three OpenHab2 components that concern us:

All this said, OpenHab2 is just acting as a really big command dispatch, converting from a GUI event to an IoT protocol event. For most item types, it hides details of exactly what command gets sent out to the device, although one item type (the String item) allows you to specify a string command to be sent via the chosen protocol. The best way to choose a type to model your item is to consider what states need to be toggled in the receiving IoT device. Incidentally, most of I3's items are currently modeled as the Switch type.

Our installation has received a small amount of custom configuration:

About the McClellan Instance

Our instance of OpenHab is currently running on McClellan (10.13.0.22). As an internal-facing server, it can only be accessed from within the network.

As noted, the configuration has already been stored to GitHub. Not incidentally, these are precisely the files you need to modify to change how our instance behaves. The local repo lives in the configuration directory--/etc/openhab2.

Most of the configuration we've performed is in either the rules/ or items/ subfolders. As implied, items/ contains the mappings which let OpenHab talk over IoT; this is typically done using Modbus or MQTT command strings. rules/ contains most of the ways those items are controlled. Note that the MQTT topic must be provided by whoever set it up; see the MQTT hierarchy notes above.

Samples of both MQTT and Modbus items are seen in this config file telling OpenHab how to talk to the Fab Lab ventilation fan:

Note the comments on the Modbus items--at present all our IoT Items talk over MQTT.

Items may be grouped using an item file; this allows a single command to be dispatched to multiple items of the same type. Alternately, multiple commands to items of differing types may be dispatched at once using a rule against a String state change, such as in the following:

To Modify the GUI

To check item configuration or change which items are exposed in the GUI, you can use one of OpenHab's provided UIs. Alternately, you can use HabPanel, which allows users to configure the UI more extensively. HabPanel is recommended. 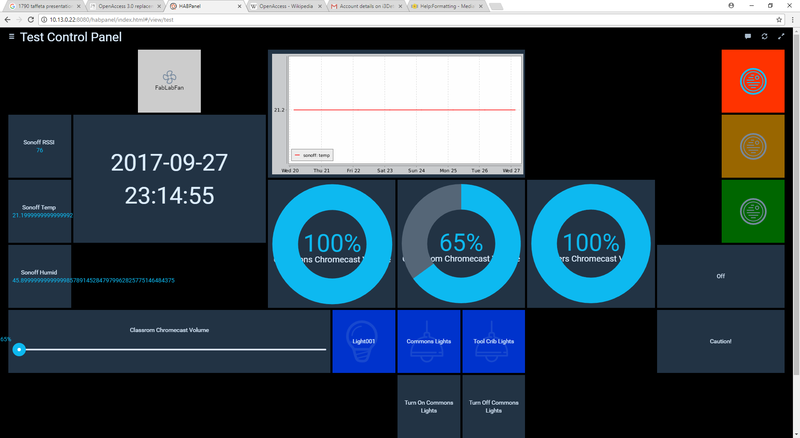