Treasury and Budget Report for Dec, 2016 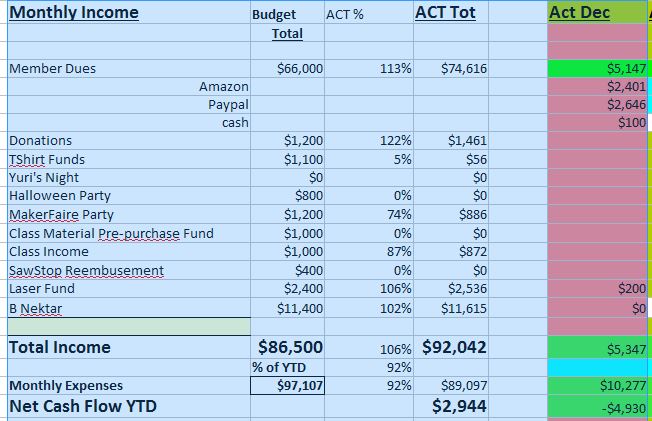 December - Corporate membership to Henry Ford official! Up to five guests plus one i3 member at a time get entry and unlimited rides for free (doesn't include IMAX?) Charlie would like somebody to set up an event to show Henry Ford we appreciate the gift.

Charlie also seeks a successor. Official transfer in August, looking to mentor someone starting as early as possible!

Nothing to report at this time.

People seem to be getting stuck between Phase 1 and Phase 2 of the membership process (we have about 9 people in this state right now, some since as early as October). Need to come up with a plan to fix this up. One of the people that slipped through the cracks earlier in the membership process has become a full member though!

No substantial issues at this time, will discuss later if required.

With the current board vacancies is the requirement of two board members too restricting? Proposal of changing policy to require one board member and one officer (or possibly a zone coordinator) was raised at the last member meeting. Main opposition seems not to be that the proposal should be dropped, but that we should be taking our time adjusting to give everyone time to weigh in and be sure enough warning is given.

Mike plans to determine how the zone can be made most useful to the membership. Specifically, tools and parts that the membership would like access to. He is interested in arranging classes, but not necessarily able to teach these classes.

One of Jody's mentees has ended his membership citing difficulty in getting certified on tools and the fact that nearly every tool had some type of authorization process. The fact (or perception) that an expert has to go through training as if they have never seen a tool before is frustrating and a bit insulting to some.

Should authorization-required tools be required to hold a certain number of classes each year? Let's get the zone coordinators together to decide on a standardized authorization process that keeps members safe and productive while ensuring equipment misuse is minimized.

Appointing someone to the Board seat left vacant by the resignation of Jamie Burdeski Update: Another board seat (Leora) has been vacated since the originally scheduled date of this meeting.

Candidates who accepted nomination in the last board election were contacted in order of votes received. Matt A. and Alec B. expressed interest. Alec is present tonight, can't confirm yet if Matt will be available at regular board meeting times. Do we want to do another election for the remainder of this term? If we do, they likely won't be installed until the beginning of next session's campaigning season. Let's appoint Alec to fill Jamie's board seat, wait to fill Leora's to give membership time to express interest and also verify if Matt A. can make meeting times going forward.

Proposal:
Appoint Alec to the i3 Board of Directors
Moved by David H., Seconded by Matt G.
3 Ayes / 0 Nays
Result: PASS
Action Item: David H. - Notify members of resignation (Leora), ask if any member is interested in serving, contact Matt Arnold to inquire about availability.

Vivian talked to the U.S Office of Patents and Trademarks, they are currently planning to visit on 2/7.

Charlie is looking for somebody to take over planning and executing second Tuesday events.