Blog
You are here: Home / Blog

VR Meetup: Rec Room Thursday 8/29/2019 7pm-10pm!
We are rebuilding i3Detroit inside of Rec Room in the ^i3Detroit Custom Room. Show up at i3 or attend remotely via PC, PS4, or VR. We will have i3Detroit’s Oculus Quest and a few other VR headsets running at i3Detroit.

If you are new to building stuff in Rec Room check out some of the basic How To Rec Room videos on Youtube.

From the first glance at the Tusano Trading Company’s wares, it makes immediate sense that Thomas’s humanities thesis at LTU was on “The value of craft … trying to find the place where making and thinking meet”. He came to i3 after outgrowing the woodshop on campus, and over two years, has developed a wide variety of works and a small business to encompass them. 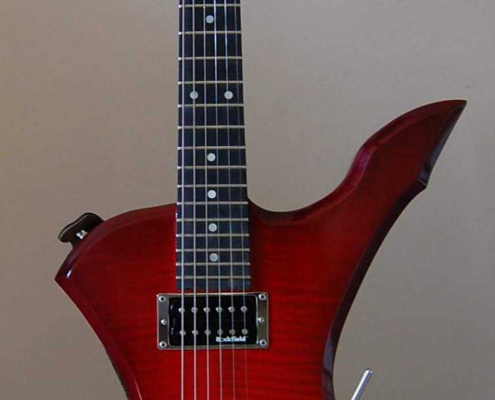 But among all the furniture and other wooden works, it’s the guitars that really stand out as his passion. Embracing the modern CNC and laser-cutting capabilities at i3, he’s both working on new designs, and spearheading the creation of a library of open-source designs, “a drawing-back of the curtain on the mechanics of the modern guitar”. 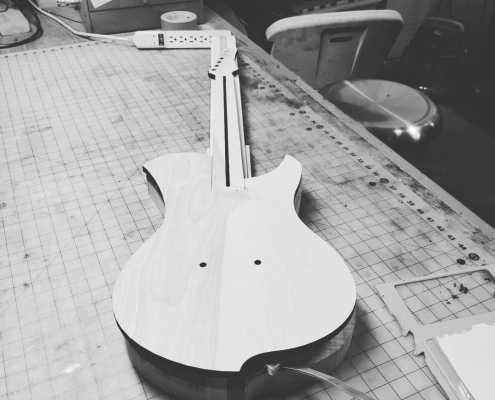 Every year, i3Detroit members submit so many projects to Maker Faire Detroit (coming up July 27-28!) that the Faire organizers give us our own tent and let us manage the details. This year, no fewer than ten of those projects are by Jan and David Henry, including the fire-shooting knights and giant castle yurt pictured here.

Inside the castle, you’ll find more projects by the couple and by other i3 members, including costumes, magic mirrors, lanterns, chandeliers… the list goes on! Many of the projects are collaborations with other i3 members.

David initially came to i3 for the Hackaday party in 2014, and Jan followed a few months later. “I wanted to know where he was going — he’d be gone for hours — it was unlike him to be out that long, so I came for the Halloween party, he showed me around, then I joined in December”

Maker Faire Detroit returns to the Henry Ford on July 27th and 28th, and as always, numerous projects by i3Detroit members will be on display. Among them, Dan Madrid’s laser-cut bathymetric maps: 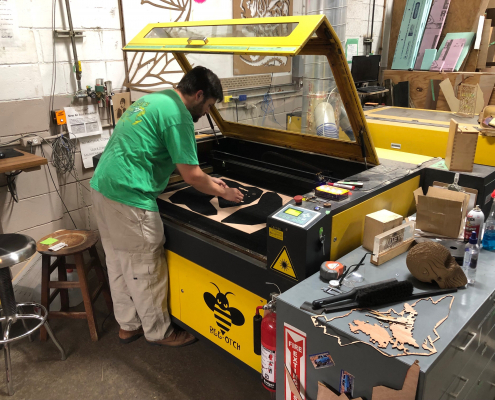 For the past several months, Dan has been a frequent sight in front of i3’s laser cutters, making plywood representations of the lakes we all know and love. It started as a hobby project, but he soon started getting requests and selling his work, following a path familiar to many of i3’s members. He’s started a small business called Madrid Crafted LLC, and most of his work is Michigan-focused.

As an MTU grad and still a frequent visitor to the UP, Dan’s most popular piece by far is Lake Superior, shown here on the wall of the Keweenaw Brewing Company tap room in Houghton: 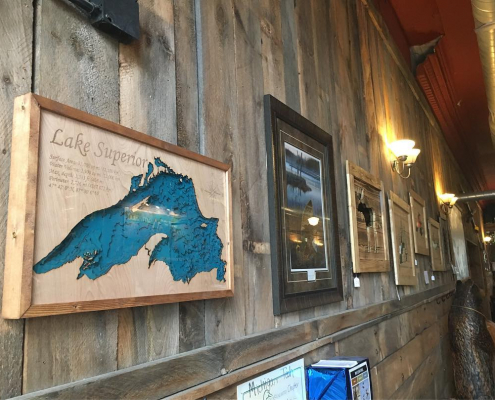 Lake Superior bathymetric map on the wall at KBC

But Dan wasn’t always an i3Detroit member — as a Ford employee, his first experience with laser-cut art was at TechShop. “They had a great woodshop, but what really hit me was the laser cutters.” The experience was eye-opening, but short-lived. After TechShop closed in late 2017, he searched for another nearby makerspace, and found The Village Workshop in Northville, close to his home in Livonia. There, woodworking and laser-cutting went from a hobby to a real side business, but The Village Workshop likewise shut down in early 2019. Dan went on the search again and found i3Detroit, a longer drive but a totally different community.

“Techshop and The Village Workshop were great places, I don’t want to disparage them, but when I came here there was a much greater sense of community. There it was much more like a business transaction, like I pay you, and I get access to your shop. There wasn’t — at least when I was there — there wasn’t much of a community aspect. When I came here, people come here to do projects, but they also come here to build relationships with the other people here. I didn’t experience that at the other places. … I know I see other people working on things and I know I can ask, hey what’s that? And that sparks some curiosity and discussion.”

That community is what drove Dan to show off his work at Maker Faire for the first time: “Having started a small business, my goal this year was to go to one farmer’s market, fair, something like that. And the nice thing is, there’s a community aspect to this, so it’s not just me finding a place on my own and figuring it out, we get to do it together.”

Here’s a simple laser project that makes a bunch of useful things.  It uses up some of those small pieces of scrap acrylic that people toss into the drawer.  Many people wonder why that’s in there, because most projects require larger pieces.  These plant markers are small enough to be unobtrusive, yet still very readable.  They won’t absorb water or decay.  And they can be reused! 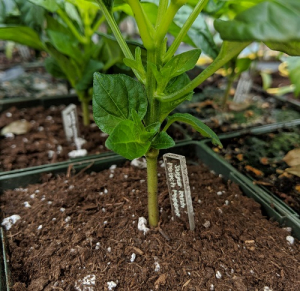 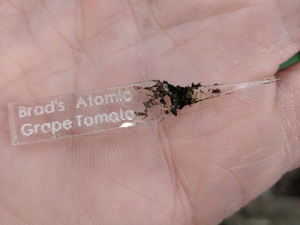